The Rules of Dutch Blitz®

BRIEF IDEA OF THE GAME: The object of the game is as follows - the game consists of four decks of 40 cards each, and can be played by four, three or two persons.  Each of the four decks has a different design:   pump, carriage, pail and plow.  Each player chooses one of these deck designs and keeps it for the duration of the game, regardless of the number of hands played.   The front of these decorative cards, or faces, are printed in red, blue, yellow and green.  The red and blue cards carry Pennsylvania Dutch Boy illustrations.  The yellow and green cards carry a Pennsylvania Dutch Girl illustration.  Each player builds three basic groups of cards in front of him from which he will play the game.   The groups of cards placed in position are referred to as the Post, Blitz and Wood Piles.  Prime object of the game is to build as many cards in sequence - 1 through 10 - in the same respective colors in the center Dutch Piles, for points toward game, using as many cards from the Blitz Pile as possible (See Figure D).  When the Blitz Pile has been exhausted, the player has ''Blitzed" his opponents and won the hand.   Cards for placement in the Dutch Piles can also be drawn from the player's Post and Wood Piles.  Several hands, or rounds, must be played until a total of 75 points is accumulated by any one player who wins the game (See scoring description).   Speed is essential in winning since everyone plays at the same time!  Dutch Blitz is a fast-moving, exciting game for everyone.

Wood Pile: Stack of cards built upon to the right of player.

Ditch Piles: Various stacks of card piles in four colors - 1 through 10 - placed in the center of the table and played upon by all players Each player accumulates scoring points here toward final game.

Post Piles: Groups of cards placed to the left of both the Blitz and Wood Piles, and to the player, it is a ''trading'' or replacement area during the game

Blitz Pile: This pile of 10 cards is the most important pile of cards to each player since it is the "key'' towards ''blitzing" the other players when all cards have been used up.  If the player is left-handed, the pile can be placed to his left for easier handling of cards.

PREPARATION FOR PLAY: Each player will shuffle his deck of 40 cards well.  He will then place the top three cards in his deck face up in front of him.  This is the Post Pile (Figure B).

Player will then deal himself the next 10 cards and place them face up in a pile to his right.  This is the Blitz Pile.  The pile should be in line with the Post Piles. See Figure C.

Each player will then hold the remaining cards of his deck in his hand.  Everyone is now ready to begin play.
NOTE:  If only two players are playing, the rules are exactly the same, except that the Post Piles should have five cards in it instead of three.


THE PLAY: One selected player (usually the score keeper) will give the signal to start.   Everyone begins and continues to play at the same time, until the end of the game.   If any of the exposed cards in front of the player is a Number 1, regardless of color, it must be placed face up in the center of the table to form the beginning of a Dutch Pile (See Figure D). 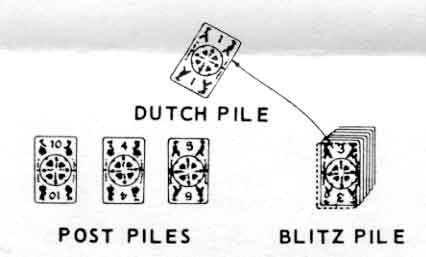 Each Number 1 card starts a new Dutch Pile.  If a player uses one of the cards from the Post Piles, the empty space is to be filled with the top card of his Blitz Pile.  Player should always have the original number of cards in his Post Piles.  When the top card of the Blitz Pile is used, it is not to be replaced.  If a player has a Number 2 card of the same color as the Number 1 card in any of the Dutch Piles, he should place it on top of the Number 1 card, then a Number 3 and a Number 4 card, etc. in an ascending sequence.   If none of his exposed cards can be used in this manner on the Dutch Piles, the player will then count off three cards in his hand.  He will turn the three cards in such a manner that the third card will be on top as they are placed face up before him, thus forming the Wood Pile and at the same time, creating a fifth, (or seventh, if two are playing) exposed card that must be played onto the Dutch Piles, if possible.  The top card of the Wood Pile may be used for any play at any time (See Fig. E).

A Number 1 card always starts a new Dutch Pile.  If no further play can be made, the player will count off three more cards from those in his hand, and turn them, face up onto the remaining (if there are any remaining) cards on his Wood Pile. Thus a player may play any of his exposed cards onto any of the Dutch Piles in the center of the table, provided he plays them onto the same color and in an ascending sequence.  When all of the cards in a player's hand have been turned over he will pick up the cards in his Wood Pile.  Without shuffling, he will turn them face down in his hand and again proceed to count off three, and turn them over again to build up the Wood Pile.  If a player desires, he may build from his Blitz Pile, Wood Pile, or from any one of his Post Pile cards, onto any other of his Post Pile cards in the following manner:  (See Fig F)

Number in the Post Piles must follow a descending sequence - seven on an eight - six on a seven, etc. In addition, the color of the card must be an alternating color - that is light on a dark- or dark on a light - with alternate cards being Dutch Boy - Dutch Girl, etc.  Both the number and the color must be visible at all times to all players when building a descending sequence onto a card.

WARNING: A player should not hesitate to build onto his Post Pile cards in the manner outlined if it helps him to use up his Blitz Pile.  But he should be warned that if he builds too much from his Wood Pile, he may tie up valuable cards.  Only the low- number card on each descending sequence in the Post Piles may be used to build onto the Dutch Pile.   Since the prime object of the game is to use up the Blitz Pile, it is to the player's advantage to give preference to playing from it rather than to make plays that can be made from the Post Piles or Wood Pile.

ENDING THE GAME: When a player has used the last card in his Blitz Pile he will shout ''Blitz" and all playing will immediately stop.

SCORING: The other players will count the cards remaining in their Blitz Pile and give this figure to the scorekeeper.  Do not touch or disturb any of the other cards at this time. When the scorekeeper has written down these figures, he will gather in all of the Dutch Piles in the center of the table, and place them in one neat stack.  At this point, all of the players will gather in their own Post, Blitz and Wood Pile cards and any cards left in their hand.  Together, the players will sort out the Dutch Pile cards that were gathered by the scorekeeper, and return them to the proper players by design - pump - plow - pail - carriage.  Each player will count his cards and give the figure to the scorekeeper when he asks for it.  He will then compute the score giving credit of one point for each card placed in the Dutch Piles and deducting two points for each card remaining in a player's Blitz Pile.   The game is then repeated and another ''round or hand" is played.  The player whose score reaches 75 first wins the game. If more than one player reaches 75 during the same play, the one with the higher score wins.

ADDITIONAL RULES: If, during the excitement of the game, a player makes a mistake, he, or any of the other players who notice the error will call out ''Dutch!" When a player shouts this, everyone must stop playing immediately, and not disturb any of the cards which have been played. The misplaced cards will then be returned to their original positions and the game resumes.  The scorekeeper will act as a referee if necessary.

RULES TO BE OBSERVED

General: Player cannot pick up more than one card at once during the play from any of his card piles.  Players may not use their hands alternately - right, left, right; or left, right, left. Throwing cards onto Dutch Piles instead of placing them is forbidden.

Dutch Piles: Players cannot start new piles with any other card number except number 1.  No player may place a card onto a pile not in proper sequence.   Building on a pile with a card of a different color is not permitted

Blitz Pile: Player cannot play any cards except from the top.  This pile cannot be shuffled at any time.

Post Piles: Player cannot build cards here other than in a descending and alternating order. Building a Dutch Boy Card - Or a dark color on a dark - light on a light, or Dutch Girl card on a Dutch Girl card is not permitted.

Wood Pile: Player cannot play any cards except from the top.  Shuffling cards in the Wood Pile is not permitted.

Cards Held in Your Hand: Turning over cards other than in groups of threes is not permitted. Player cannot shuffle the cards in the deck he holds once the play has begun.  Taking groups of three cards from the bottom of player's deck violates playing rules.